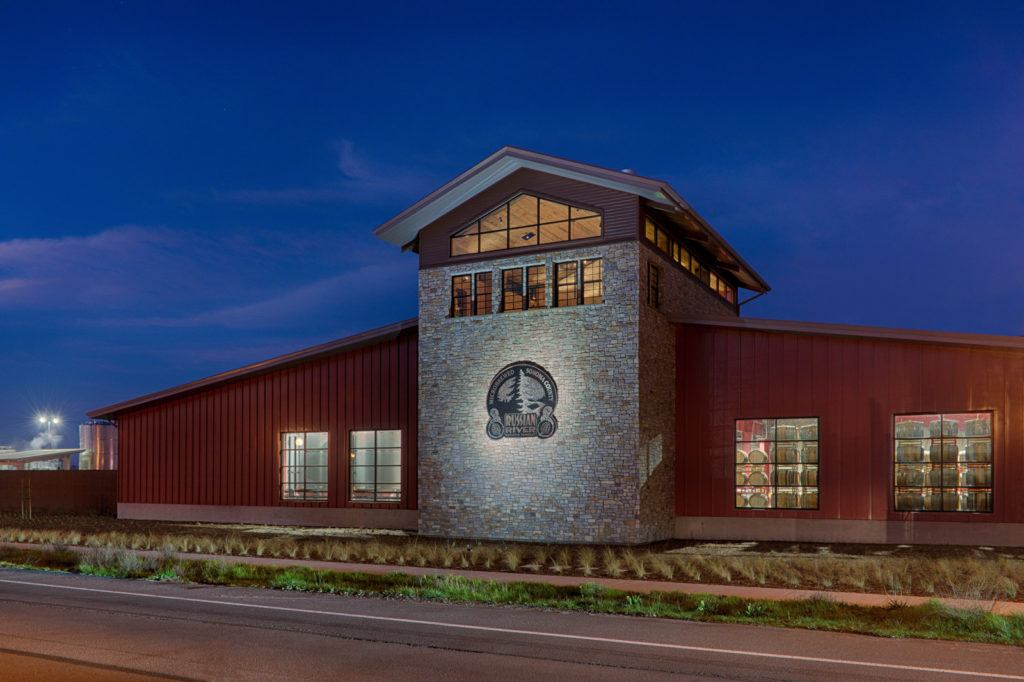 In 2017 Santa Rosa, CA was voted the “Microbrew Capital of the United States”. The title is hard to argue with considering the city is home to the original Russian River Brewing Company. Known to locals affectionately as “The Pub,” this hot-spot has been brewing some of the nation’s most popular craft beers since 2004. Thirteen years later, FDC was chosen as the general contractor for their brewery construction project, including a new 120,000 square foot facility and beer compound.

The new Russian River Brewery facility in Windsor, California, encompasses the entire craft brewery experience. From the brewing process to bottling, all the way to consumption, this craft beer campus attracts beer enthusiasts from around the world.

The compound is broken up into three sections, all of which required different building methods. Our expert brewery design-build construction team at FDC gladly accepted the challenge.

The hospitality building and offices were constructed out of solid wood framing. The modern design of wood-frame buildings provide maximum comfort to its occupants and are easy to heat and cool down.

Wood framing is beneficial for commercial construction projects because of the endless architectural possibilities the building technique offers.

The brewery bottling line, distribution center, and beer brewing facility are centrally located on the campus. The use of pre-cast concrete helped our build team at FDC maximize the facility’s requirements while making sure it is completed on time.

Pre-cast concrete is an incredibly efficient building material. It offers advanced versatility and customization, without jeopardizing the durability of the building. This versatile building material also has extremely efficient installation capabilities, making it an optimal option for our builders during commercial construction projects.

Located in the eastern wing of the facility is the barrel room. This is where all the highly sought after sour beers are barrel-aged. This part of the building process was completed with a pre-engineered metal building.

Pre-engineered metal buildings (PEMB) are customizable and offer convenient possibilities for future brewery expansion. Due to the custom fabrication of a PEMB, the construction process is simplified, saving time and money without compromising quality. This reduced construction time and costs, make their use in large scale brewery projects ideal.

Koelschip or Coolship is an essential part of the beer fermentation process. It is a shallow, open-mouthed vessel in which fresh wort is cooled and exposed to natural bacteria and wild yeasts.

The Koelschip at Russian River Brewing Company is lined with untreated wood to allow the natural cultures to absorb and “season” the room. This design style also gives the space an old Abbey feel that is desirable for many craft breweries.

Our general contractors at Facility Development Company are honored to work alongside so many leaders of the craft brewery industry in Santa Rosa, Napa, and throughout Sonoma County. Learn more about the amazing businesses that have chosen us for their brewery construction projects by reviewing our online portfolio.

With the demand for craft beer on the rise, more and more new tap-rooms and craft breweries are calling Sonoma County home. We want to work with you through every step of the design, permitting, and construction process to create the brewery facility of your dreams. Contact Facility Development Company online or by phone to learn more about our commercial construction services.